Is an Electric Car Better for the Planet? 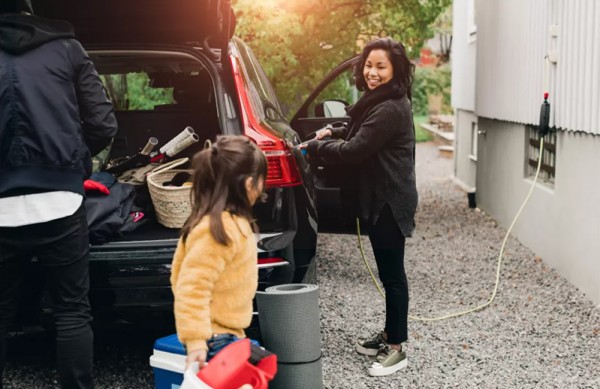 Which is better for Earth: an electric or gas-powered vehicle? The answer to this question might seem blindingly obvious: Of course electric cars must be better for the environment, because they don’t have exhausts and so don’t emit greenhouse gasses as they drive. However, electric vehicles (EVs) aren't perfect, and they come with their own set of polluting problems. Notably, their batteries contain components, such as lithium, that require a significant amount of energy to source and extract.

But battery production is just one part of an electric car's life span. A 2014 study published in the journal Proceedings of the National Academy of Sciences looked at the entire life cycle of an EV's emissions, from mining the metals required for the batteries to producing the electricity needed to power them, and then compared this with the average emissions of a gas-powered vehicle. The team found that when electric vehicles are charged with coal-powered electricity, they’re actually worse for the environment than conventional gasoline cars.

In much of the world, however, national grids are now clean enough for EVs to beat their gasoline-powered counterparts when it comes to pollution and greenhouse-gas emissions during their lifetimes.

"Only when connected to the dirtiest, coal-heavy electric grids do gasoline internal combustion engines become comparable to EVs on a greenhouse gas basis," said Colin Sheppard, a researcher with expertise in energy and transportation systems engineering at the Lawrence Berkeley National Laboratory in California.

There are very few places where electric grids are still supplied entirely or mainly by coal. China is one of them; in 2019 it was estimated that 58% of the country’s power supply came from coal and it’s likely that some parts of China are still entirely supplied by coal. However, China’s grid is improving with more investments in renewables – for example, it has twice the wind energy capacity as the U.S. and it builds more solar panels per year than any other countries, according to Nature magazine.

This pattern of improvement — more renewable energies and fewer fossil fuels — is a global one and it helps to boost the environmental credentials of electric vehicles, said Gordon Bauer, an electric vehicle researcher at the International Council on Clean Transportation in San Francisco. "As grids become greener during the lifetime of an electric vehicle, it's only going to get better."

In a study published this month in the journal Environmental Science and Technology, Sheppard modeled a hypothetical future scenario in which all cars were electric. "We wanted to understand what the energy, infrastructure and emissions implications might be if all passenger vehicles are electrified," Sheppard told Live Science. Bauer also collaborated with Sheppard on the project. Their findings come out strongly in favor of an electric vehicle future.

For example, Sheppard calculated that if all privately owned vehicles in the U.S. were electric, it would reduce greenhouse-gas emissions in the country by 46% annually (0.5 gigatons of carbon dioxide) compared with conventionally gas-powered cars. This reduction could be increased even further if those vehicles were subject to so-called "controlled charging," a technique also known as "smart charging," in which vehicles are recharged at strategically chosen times to minimize the financial cost of generating electricity. (For instance, charging at night is often less pricey than during the day; this strategy also favors more efficient energy-producing plants that produce cheaper electricity.) If all privately owned electric cars were charged in such a way, the emissions savings could rise to 49% annually.

These estimates are based on what Sheppard admits is an "ambitious" imagining of the U.S.'s future energy portfolio. This future envisions a country with a lot more renewable energy, but which still hasn't reached the goal of zero carbon, or having a national grid that doesn't contribute to climate change, he said. There is a considerable amount of political will and practical change that needs to happen to make this scenario possible, but it’s still helpful to map out the full theoretical potential electric vehicles under these circumstances.

In short, it's far easier to argue in favor of buying an EV than a gas- or diesel-powered vehicle from an environmental perspective. But what about cost? Aren't electric vehicles too expensive for most people to afford?

A 2020 report from the consumer rights group, Consumer Reports, suggests this is also changing. The paper estimated that the per-mile repair and maintenance costs over the lifetime of an EV is a little less than half that of traditional vehicles with internal combustion engines. This is largely because electric motors have just one moving part, compared to traditional engines which often have dozens. This means fewer components need to be replaced in an EV, resulting in significant savings albeit not at the point of sale.

"It may sound radical right now, but by the time 2030 rolls around, I think the problem will be about how quickly manufacturers can make them," Bauer said.

In a recent U.S.-wide analysis carried out by Bauer, he concluded that the high rate of depreciation for new electric vehicles will lead to larger benefits for lower-income households that are more likely to buy used cars. This, along with other factors driving price reductions, such as technological innovations and increased supplier competition, will mean that an EV should cost the same as a conventional gasoline-powered car for almost all income levels by approximately 2029, Bauer found. Furthermore, Bauer calculated that by 2030, low-income households in the U.S. stand to save $1,000 per year from fuel savings if they were to switch to an EV.

Plackett, B. (2021, February 28). Is an electric car better for the planet? Retrieved March 05, 2021, from https://www.livescience.com/electric-cars-environment.html