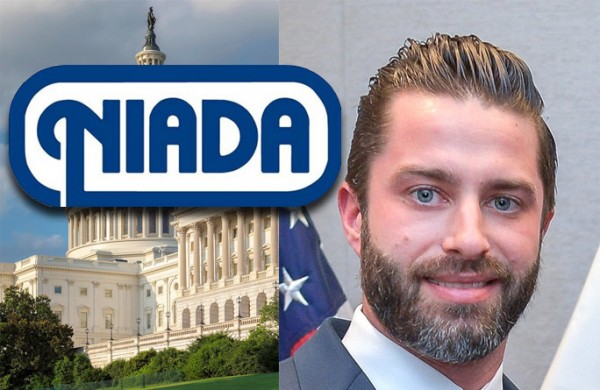 NIADA is your voice in Washington D.C., advocating for independent dealers, the used vehicle industry and small business. Here’s a look at the latest news and NIADA efforts regarding legislative, regulatory, PAC and grass roots activities.

American Jobs Plan: President Biden has proposed a $2.25 trillion bill he calls the American Jobs Plan that the White House has said is part one of a two-part plan to update and improve the nation’s infrastructure.

The plan earmarks $621 billion for transportation infrastructure, which includes $115 billion for repairing and upgrading some 20,000 miles of roads and more than 10,000 bridges, $85 billion for public transportation, $80 billion to upgrade and expand Amtrak and $174 billion to spur the electric vehicle market, including grants and incentives to build 500,000 EV charging stations nationwide as well as rebates and tax incentives for consumers who buy American-made EVs.

The Administration hopes to pay for the plan with an accompanying tax proposal that would raise the corporate tax rate to 28 percent. That’s a considerable increase from the current 21 percent put in place by the Trump Administration’s tax cuts, but less than the pre-Trump 35 percent.

It would also eliminate a rule that allows U.S. companies to pay no taxes on the first 10 percent of returns when they locate investments in other countries. But it would not include a gas tax or a mileage tax.

The infrastructure bill faces a difficult road to passage in a Congress with a razor-thin Democratic majority, thanks to strong Republican opposition to the massive cost and scope as well as disagreement between liberal and moderate Democrats on what should be included.

As the name suggests, the bill, which passed both the House Senate by overwhelming majorities, extends the PPP application deadline to May 31 and provides an additional 30-day period for the Small Business Administration to process applications that are still pending.

That means there’s still time for independent dealers to apply for forgivable PPP loans through the SBA’s popular COVID-19 relief program, which had previously been set to expire March 31.

Federal Communications Commission: In a unanimous decision, the Supreme Court struck down the FCC’s broad definition of an autodialer, which encompassed virtually all modern phone devices and led to a wave of lawsuits.

The Telephone Consumer Protection Act prohibits autodialed calls or text messages without prior express consent of the called party, and defines an autodialer as equipment that has the capacity “to store or produce telephone numbers to be called, using a random or sequential number generator.”

The FCC’s interpretation, which had been upheld by the Ninth Circuit Court of Appeals, said any device that can store numbers and dial them – including basic cellphones – could be classified as autodialers.

In the majority opinion, Justice Sonia Sotomayor said the expanded definition to include any equipment that stores and dials telephone numbers “would take a chainsaw to these nuanced problems when Congress meant to use a scalpel.”

The decision does not impact other requirements of the TCPA, including restrictions on automated calls with prerecorded voice messages and Do Not Call rules.

And it’s not necessarily the end of this issue. Several members of Congress, including TCPA co-author Sen. Ed Markey (D-Mass.) have criticized the court decision, and threatened to introduce legislation to change the statutory definition.

One of the most effective things you can do as an independent vehicle dealer to protect our industry is to engage with your elected representatives. Nothing is more impactful to a legislator than hearing directly from constituents, and establishing a relationship makes your message more likely to be heard.

Coming this year, NIADA-PAC will give you an opportunity to engage with your congressional representatives – and find out what’s really happening in Washington.

Coffee With Congress is a series of virtual events designed to let NIADA members hear directly from – and engage with – the member of Congress from their district for an inside look into the issues important to them.

The events will be announced throughout the year, so keep an eye out for one in your area – and you could be having Coffee With Congress.

Arizona: Arizona IADA is working to oppose a bill being considered by the Arizona state senate that would remove an important “last-resort tool” for Buy Here-Pay Here dealers.

House Bill 2348 would repeal a previous law that allows a finance company to report a vehicle stolen if a consumer is in default for more than 90 days and hides the vehicle from the secured creditor.

The bill passed the House by a 59-0 vote in February and is now in the Senate, where it was referred to the Judiciary Committee.

In a letter to the committee’s vice chair, Sen. Nancy Barto, AIADA pointed out the vast majority of repossessions are done “civilly, often voluntarily, at reasonable costs.” But when individuals fall far behind and are not accommodating, those who “receive letters warning about class six felony consequences, most cooperate to voluntarily surrender their vehicles civilly.”

AIADA said the current law is not being used to “make police the repo man,” but rather to create less work for police, noting that if it’s repealed, repos would require a police report and a summons, as well as possible warrants, arrests and hearings.

The letter added that police often refuse to file reports because they feel the repo is “just a civil matter.”

“Their choice to not uphold the law lets consumers in default walk away from their loans while still maintaining possession of the vehicle,” AIADA wrote. “This hurts creditors, many of which are small mom and pop businesses and sends the wrong message to people with criminal intent.”

Illinois: NIADA and Illinois IADA, working in collaboration with GPS providers, helped defeat HB3216, which would have required all vehicles registered in the state to have starter-interrupt devices that could be activated by law enforcement at the vehicle owner’s request but could not be activated “solely as a means to secure payment on the vehicle.”